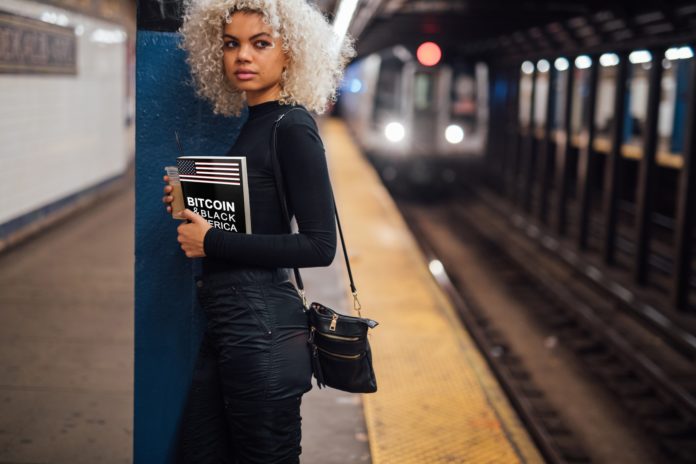 Part of this conversation – taking place on the streets, over the airwaves and in people’s homes – is that economic inequality is what separates black Americans from the rest of the nation. In Minneapolis, for example, the median income for black households is $38,200, less than half of their white counterparts.

Like everywhere else, the protests are also a divisive issue in the crypto ecosystem. There is, however, a general agreement that there are no easy technological solutions to the larger problems plaguing the nation.

While naive claims that “Bitcoin Fixes This” are outwardly derided, Isaiah Jackson’s book title “Bitcoin & Black America” is gaining traction. The mantra, painted on signs seen in Raleigh, N.C., and across Twitter feeds, promises nothing but contains a kernel of insight.

Jackson, founder of KRBE Digital Assets Group and the author of Bitcoin & Black America, thinks that bitcoin can play a crucial role in addressing economic disparity in black communities.

CoinDesk sat down with Jackson to get his take on this week’s protests and what role bitcoin can play in bettering black lives.

What do you think sparked the massive protests happening across the country?

The protests we’re seeing now were sparked by police violence, but the undertone – a lot of the anger that people are expressing – is economic in nature.

There are 40 million people unemployed, you have people sitting at home angry that the economy they helped build can no longer support them. Some of them received this bullshit $1,200 check, but most of the stimulus was given right back to the millionaires.

The economic injustice that we have today is the result of history. Take redlining, for example, most people don’t understand that generational wealth is accrued through homeownership. Being able to purchase a home in a community that increases in property value over time has given other communities the ability to gain that value without having to do much.

The ability to buy a home, pay off your mortgage and enrich future generations wasn’t available to the black community [because of redlining]. Black people were excluded from receiving home loans, and when they did, were offered extortionary rates and relegated to neighborhoods that could never really gain in property value – by design.

If you look at where major highways are built and where the exit ramps are located, you’ll notice it’s mostly in black areas. This destroyed the property value in black neighborhoods that were already built. In North Carolina, where I’m from, there was an investigation into why I-85 runs along predominantly black counties. All of this comes out of historical injustices that are still propagated today.

Police violence is terrible, and it’s not something that could just be solved with bitcoin. But some of these solutions that I’ve seen that can work for the black community are rooted in group economics.

Living in Los Angeles, I’ve learned from places like Koreatown, Chinatown and smaller communities like Little Ethiopia that understand how group economics works, that the ability to circulate dollars in a community enriches everyone and makes them inherently self-sufficient. Bitcoin offers a similar dynamic.

If you look at the black church, compared to the catholic church that has billions of dollars in gold and real estate, the black church lacks tangible long-term assets. Over 80% of the black community attends some form of group service. If the church begins accepting bitcoin donations as a 501(c)(3) and stores it, that could help support the community in the long term. You can’t stop Bitcoin.

Are there political solutions to bolster civil liberties?

If we actually had a democratic system, where one person equals one vote, we would see a huge difference. Unfortunately, at the national level, there’s the electoral college where states have the authority to overturn the voters’ will.

I’d like to see that repealed. Right now, voting is really just the suggestion of democracy, no one is really electing their leaders. At the local level, I think we need to get money out of politics, where mid-level politicians can co-opt the vote. Fundraising should be standardized, and everyone should only be allowed to give the same amount. That’s where blockchain can be effective, to be able to track how much and where money is coming from, without manipulation.

There are some interesting blockchain projects that allow decentralized communities to foment. Most of these projects are still very early, so the liquidity isn’t there for them to be as effective as bitcoin has. But you have projects based on Ethereum, the second-largest blockchain, like smart-contract-based voting that could improve local politics.

I believe that blockchain itself isn’t hot sauce, as my friend says, you can’t put it on everything, however, I do think there will be technological solutions to help black communities.

You’ve mentioned before that the real way to help black communities is by voting with their dollars. Could you break that down?

From a numbers standpoint, most of the wealth in this country is stored in corporate investments. One of the things I write in the book is that 99% of venture capital flows into other communities, while only 1% goes towards black founders.

You don’t have to give your money to black people, I’m not asking for donations, but at least look at black businesses and shop with black businesses every now and then. Most are passed by or haven’t built trust with people from other communities. In my own experience, being in the fintech sector, I’ve been questioned plenty of times about my knowledge of finance.

You have to realize that black people are just as viable in every business sector. In short, if you want to help: shop with black businesses. That’s what will help build a strong middle class. And, of course, speak out if you see something.

Andreessen Horowitz announced a $2.2 million fund Wednesday dedicated to funding underrepresented founders. Last month they raised $515 million for a second crypto fund. Does this demonstrate the misplaced priorities of the financial sector?

I think most of these companies are just realizing now that they want to give to black tech founders. It’s better late than never. At the very least you are doing something.

There’s a lot of wealth created through venture capital, which can support the creation of businesses for the long term, so that investment is needed. $2.2 million is a start, and once we prove ourselves with companies that actually work, we can go from there. Money talks and bullshit walks.

How do you make sense of the violence that has erupted during the George Floyd protests?

In terms of the violence going on, it’s clear it’s not just black protestors, there are some other forces at work here. I’ve seen too many videos of random people and organizations – I’m not sure who these people are – showing up and breaking glass. I’ve seen kids being paid off, bricks left in random places like its Fortnite. It seems too coordinated for me to think that it’s all spontaneous.

Are there opportunists there? Yes, absolutely. It’s a small percentage of the protestors, but they exist, and it’s all the news is going to show. The way I feel about it is, you have angry people who are going to go on the streets and do whatever they feel.

Obviously the collateral damage is affecting small businesses, and I would like to see local businesses not get touched. Some of these corporations have mistreated people for years, so I don’t really sympathize with them. They’ve underpaid and overworked people. Like I said before, the undertone of these protests is economic in nature. People are starting to see that they cannot trust anything in this system and our money has to be tied to that thought process.

What do you make of major corporations making statements in support of the protests: Is it empty virtue signaling or representative of a greater sea-change?

I think most of it is virtue signaling. There are genuine actors that want to help, but there are also those who put out empty statements who don’t want to be seen on the wrong side of history. It is what it is, it’s what they have to do. A great form of peaceful protest is to not shop with businesses that don’t show full support of ending systemic violence. That’s how you hurt people, if they can’t make money, then racism becomes really stupid, really fast.

Why do you suppose the slogan “Bitcoin & Black America” has gained a bit of traction during the protests?

I’m glad it has caught on. I went through about 10 different names, but I think I found a catchy one. If people think about it there is some synergy between bitcoin and black America.

Once the smoke clears – what are we going to do, go back to the same system? – the Federal Reserve expanded its balance sheet past $6.5 trillion. Inflation is going to destroy a number of industries, so we have to find a way out. But the message is out there, it’s on sweatshirts and posters.

Where do we go from here?

We need solutions. The rioting and looting is not going to last forever, people do not have the gumption to be violent for months at a time.

First, we need police reform. From my standpoint, there has to be an emphasis on increasing the wealth of our community, and rebuilding trust, and being able to build something like Black Wall Street.

There was a time when, in the 1800s, where black communities had established financial centers in Tulsa, Okla., in Richmond, Va., outside of Cincinnati, there was also a plan for something called Soul City. If black people were left alone, we’d have been able to build ourselves up, but of course all of those places were burned to the ground by racist white people.

What I’m trying to show now is that we can do that now. But we need systems in place that can protect us and enable us to flourish economically. I don’t think people want handouts, I just think they want to be left alone.

What will George Floyd’s legacy be?

He’ll be remembered as the spark that may have changed the world. It was a spark during a perfect storm of economic distress and growing inequality.

When we look back at 2020, I hope everyone will remember his name and hopefully we will not have to do this again.