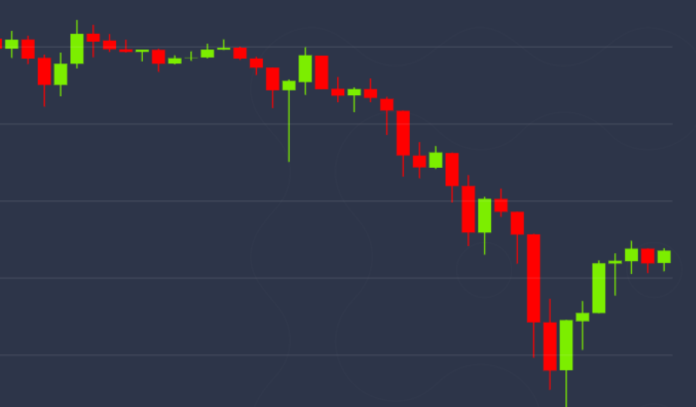 Bitcoin is feeling the pull of gravity on Monday alongside losses in the traditional markets.

At press time, bitcoin is changing hands near $9,080, representing a 2.7% decline on the day. Prices hit a three-week low of $8,910 during the early European trading hours, according to CoinDesk’s Bitcoin Price Index.

Meanwhile, futures tied to the S&P 500 are down over 2.5% and major Asian and European equity market indices are in the red red, apparently over fears of a second wave of coronavirus infections in China.

The decline in bitcoin prices, however, could be short-lived, options market data suggests.

While bitcoin looks to be tracking equities lower, the top cryptocurrency’s put-call volume ratio has risen to three-month highs. At 1.79, the ratio currently stands at the highest value since the markets crash on March 12, according to data provided by crypto derivatives research firm Skew.

“A put-call ratio above 1 is considered to be an indicator of a selloff while a put-call ratio below 1 is an opportunity to buy,” as per Investopedia.

In bitcoin’s case, a reading above 1.7 could be considered too high. In the past, the ratio has breached that level only two times. Further, on both occasions, prices bottomed out on the same day or the following day.

Similarly, the cryptocurrency bottomed out near $6,500 in mid-December with the put-call ratio rising to levels around 2.00.

As such, the latest reading of 1.79 could be considered an advance warning of an impending bear trap – more so, as the put-call open interest ratio, which measures the number of open put options relative to open call options, recently hit a 14-month low of 0.40.

“The divergence between the put-call volume and the decreasing put-call open interest implies that a lot of the put positions have been closed out on profit-taking,” according to Chris Thomas, head of digital assets at Swissquote Bank.

Validating Thomas’ argument is the recent decline in the one-month put-call skew from 9.4% to 6.3%. The put-call skew measures the price of puts relative to that of calls. The decline, therefore, represents a recovery in demand for (bullish) call options.

Meanwhile, the three-and six-month skews are also hovering in the negative territory, implying stronger demand for call options expiring in the September and December expiry contracts.

That said, options market positioning is known to change quickly and the cryptocurrency remains vulnerable to potential deeper sell-off in the equity markets.

“The key thing to watch over the next few weeks is the Covid related equities sell off. If markets react very negatively towards the increased Covid cases, we may see more panic which could also pull bitcoin lower,” said Thomas.

In addition, bitcoin’s network statistics are painting a bearish picture and the cryptocurrency’s “fair value” looks to be below $7,000, according to Atlantic House fund manager and ByteTree founder Charlie Morris.

Miners, in particular, have accumulated inventory over the past seven days, selling less coins than they generated.

Miners often hoard coins when they feel the market lacks the strength to absorb further sales, as discussed earlier this month.

Disclosure: The author holds no cryptocurrency at the time of writing.