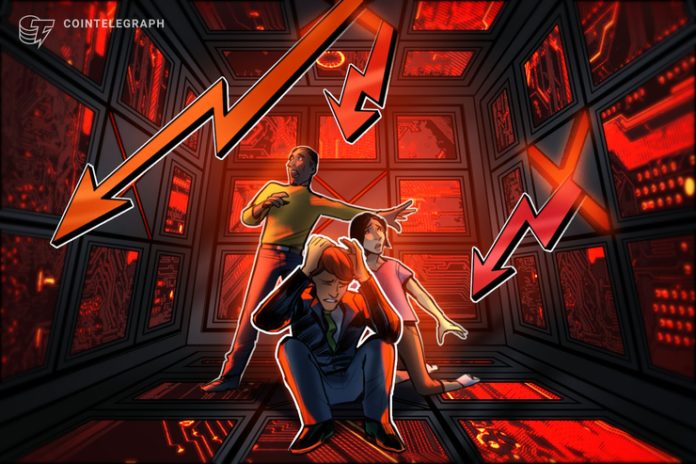 Bitcoin (BTC) fell further below $7,000 on Dec. 17 after a loss of support the previous day caused bears to strengthen their grip on the market.

Data from Coin360 and Cointelegraph Markets showed BTC/USD fluctuating around $6,900 on Tuesday but failing to reclaim the $7,000 range. A subsequent further dip produced local lows of $6,710.

Monitoring the situation, analysts and traders highlighted the precious nature of day markets. Joe007, a leading trader on Bitfinex who recently made headlines over an 800 BTC market move, this time noted current BTC/USD levels had been maintained artificially.

Writing on Twitter, he pointed to a chart uploaded from exchange Bitfinex purportedly showing a “buy wall” of around 500 BTC, which a source steadily topped up, allowing $6,900 levels to endure.

The trader known as Livercoin on Twitter, who spotted the phenomenon, added in additional comments that the wall must collapse before Bitcoin could make a decisive move and exit the sideways trading pattern in place during Tuesday.

Despite the fragility, not everyone shared a negative outlook for Bitcoin’s short term.

In his latest update to subscribers of his Telegram channel, regular Cointelegraph contributor filbfilb said he felt there was less risk in longing Bitcoin below $7,000.

“Spent quite a bit of time rallying about the orderbooks and just generally how the market has reacted and I’m fairly satisfied that I’m prepared to take a risk that this thing is going to bounce,” he wrote.

Continuing, he hinted that there was nonetheless potential for surprises:

“The bid sides have filled up and I haven’t really seen much follow through on the asks. The volume was also pretty lame with the exception of one four hour candle. I don’t recommend following me into this but ima see what happens.”

The oscillator gives a reading of Bitcoin price as a percentage of its energy value. Currently, the level is at a slight uptick in a broader trough. Twice before, such a characteristic has been followed by significant upside.

“2019 looks VERY similar to the starting characteristics of prior bull runs. Just need to see that uptick in Hash Rates,” Edwards commented.

Altcoins clearly felt the pressure as Bitcoin fell. Out of the top twenty cryptocurrencies by market cap, many fell by more than double BTC/USD.

Ether (ETH), the largest altcoin, dived 7.9% to hit $131, while the majority of others delivered similar losses.

Binance Coin (BNB) performed worse still, shedding 12.7% to languish below $13. XRP’s latest dip meanwhile sent the altcoin below the $0.20 mark for the first time since October 2017.

The overall cryptocurrency market cap was $185.1 billion at press time, with Bitcoin’s share up at 67.1%.