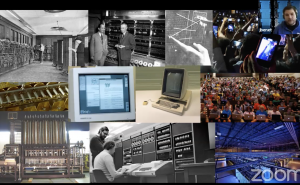 Consensus: Distributed ended on a high note with a keynote address from Juan Benet, founder of Protocol Labs, who granted a rare interview as he closed out the week-long virtual conference.

Speaking widely on the topics of decentralization and Web 3.0, Benet said, “the internet has become dramatically more important to us.” Over a 50-year time span, computing has gone from an idea to a “species altering technology.”

You’re reading Blockchain Bites: Consensus Edition a twice daily roundup of all the notable news out of Consensus: Distributed. You can sign up for this, and all of CoinDesk’s newsletters here.

But the internet’s present configuration is a huge problem. The underlying principles of an open and permissionless web, as originally intended, have become distorted by monolithic, centralized service providers, and given way to surveillance capitalism, data encroachment, hacking and content siloing.

Many of these problems were examined in an earlier session dedicated to current and coming models for media distribution – from newsmaking to music. “We are all creating and consuming content at a frantic pace, and using tech all the time to do so,” Lance Koonce, the workshop’s moderator said, by way of framing the conversation.

Different media have different revenue streams, said Chris Tse, founding director of Cardstack.
And all of them are broken. The issue at hand is technology has claimed not only the media type, but also the audience and distribution.

Crypto and blockchain could contribute to a solution, though most of the featured guests were skeptical.

Speaking on the topic of misinformation, Kathryn Harrison, founder of the DeepTrust Alliance, cited a recent survey that found three-quarters of adults aren’t sure they can accurately recognize fake news. And a plurality said misinformation impacts their trust in governments.

There’s no cryptographic solution, or new law, that could fix what is essentially a human problem, said Nadine Strossen, professor at New York Law School.  But media literacy, fact checking and common sense are critical parts of any solution.

Tech works best if it can solve a small issue first, and then scale, said GiantSteps Media’s Bill Rosenblatt. Quoting Jeffrey Moore, a tech market strategist, he said “you need to solve a niche pain point problem for someone before you can go on and boil the ocean.”

“This ownership thing is a solution in search of a problem,” Rosenblatt said, speaking about wide-ranging identity solutions intended to revamp the web. Like Juan Benet’s.

“Web 3 is about creating a platform that is decentralized, that puts human rights foremost, and can build a much freer and open internet and lock it in place,” Benet said.

The core principles of Web 3.0 are about ensuring freedom of speech and assembly, data ownership and self-sovereignty. If you sacrifice on these at the outset, give way just a bit on the vision, it cascades down into what will be built.

Blockchain and cryptocurrency have already “changed the underlying guts and rails of major industries,” Benet said. For instance, fleek is allowing people to spin up decentralized websites, while Audius is reshaping music streaming while maintaining a “Web 2.0 quality user experience.”

The idea that started with Bitcoin, of establishing financial freedoms, has extended to all kinds of other industries, reshaping the possibilities of a shared computing platform.

But there’s a lot of work left to do.

And with that, we bid you adieu. Thanks for attending and reading.

The CoinDesk 50 is an annual list celebrating the most important organizations in crypto. We’ve been announcing five nominees per day, and have highlighted Binance, Cosmos, Brave, Bitmain, MakerDAO, Besu,  Silvergate Bank, Bitcoin and the People’s Bank of China as particularly noteworthy. Read the full list here.

Earlier this week Former Treasury Secretary Lawrence Summers claimed one of the problems with the current monetary system is “too much privacy,” at Consensus: Distributed. In his latest Money Reimagined newsletter, CoinDesk’s Chief Content Officer Michael Casey riffs on this theme.

“Despite [the current] surveillance system, the U.N. Office on Drugs and Crime estimates that between $800 billion and $2 trillion, or 2%-5% of global gross domestic product, is laundered annually worldwide. The Panama Papers case shows how the rich and powerful easily use lawyers, shell companies, tax havens and transaction obfuscation to get around surveillance. The poor are just excluded from the system,” he writes.
Central bank digital currencies (CBDCs) are likely to only exacerbate surveillance into our financial lives. Unless they’re built using protocols and cryptographic tools that enable both privacy and security.

“Self-sovereign identity models and zero-knowledge proofs, for example, grant control over data to the individuals who generate it, allowing them to provide sufficient proof of a clean record without revealing sensitive personal information. But such innovations aren’t getting nearly enough attention,” Casey said.

You can read his full take here, or get it in your inbox by subscribing here.

Excerpted from The Men Who Stare at Charts, Ben Munster’s exploration of technical analysis and the people who promote it:

Charts tracking the price of bitcoin dominate six buzzing monitors in the third-floor office of a rotting, centuries-old tower block in the heart of Kiev. A pattern emerges among the shifting forms and shapes, and Brian – a 33-year-old trader who asks we use only his first name – reacts swiftly, punching his extemporaneous analysis into a chatbox on the messenger app Telegram. He has identified the distinctive downward twist of a “falling wedge formation.” To those in the know, that means: The price is going down at a diminishing rate, and should presently head moooooonwards. Get the full story

Jess Klein dives into Generation Crypto, an ageless, country-less and class-less augment cohort aligned by a belief in decentralization and skepticism of received wisdom. This excerpt from her eight part series follows Jesse Grushack – The Burner – co-founder of Ujo Music, the Ethereal festival and one of the main organizers of Node Republik, a Burning Man camp for ConsenSys workers and Ethereum enthusiasts. Read the series.

Jesse Grushack started mining bitcoin in 2010, using all of his computer power over the course of three days to come up with 1/200th of a penny. Despite the discouraging start, Grushack’s interest in cryptocurrency didn’t wane; when he learned about a company called ConsenSys in 2015 via the New York City Tech Slack channel, he got in touch and got a job. “It was just a black website with the one-line description, ‘A decentralized venture studio building applications primarily on Ethereum,’” he recalls, “and I was like, wow, that means nothing.” Read on.

Jeff Wilser profiles David Birch, in The Man Who Forecast a Currency Cold War, excerpted below.

Fintech guru David Birch, a consultant and prolific speaker on the blockchain conference circuit, wrote “The Currency Cold War: Cash and Cryptography, Hash Rates and Hegemony,” just in time for our global pandemic. He nailed the timing. For years Birch had his own pet theories about a clash of digital currencies. But “that was just me, just some guy talking about it,” he tells me in his British accent, which seems always on the verge of a sly joke. “And who cares, you know?”

In the fall of 2019, at a Jackson Hole, Wy., event Birch describes as a “Burning Man for people who run central banks,” the Governor of the Bank of England, Mark Carney, said that perhaps it was time for some form of “synthetic hegemonic currency” to deal with what he called the “destabilizing dominance” of the U.S. dollar.

This comment seemed to galvanize Birch. “The Governor of the Bank of England is emphatically not just some guy,” Birch says. He realized the Currency Cold War was not just his own pet theory – it was imminent. It might already be happening. And it has consequences. Which currency would society choose? Would it be one or many? Read the full tale.

Central Banks Mull Creating a CBDC, but Not on a Blockchain: Survey
Central banks in 46 countries are considering creating a central bank digital currency (CBDC) using a constrained form of distributed ledger technology (DLT), according to a new survey. But they’re leery of blockchain. Though only one unidentified “small African central bank” would consider using a blockchain to support this digital currency “if found to be the best available platform.”

Visa Patent Filing Would Allow Central Banks to Mint Digital Fiat Currencies Using Blockchain
A new patent filing outlines a system that would be able to mint digital fiat currency and keep a tally of all issuances on the blockchain. Managed by a “central entity computer,” the system would also remove physical cash from circulation.

Bequant Launches Crypto Prime Brokerage to Compete for Institutional Money
Digital asset services firm Bequant launched a prime brokerage service for institutional clients to have easier access to liquidity, custody, lending and other products. Prime brokerage refers to a bundle of specialized services offered by investment banks and securities dealers to their hedge fund clients. Tagomi is the largest of the few prime brokers in crypto.