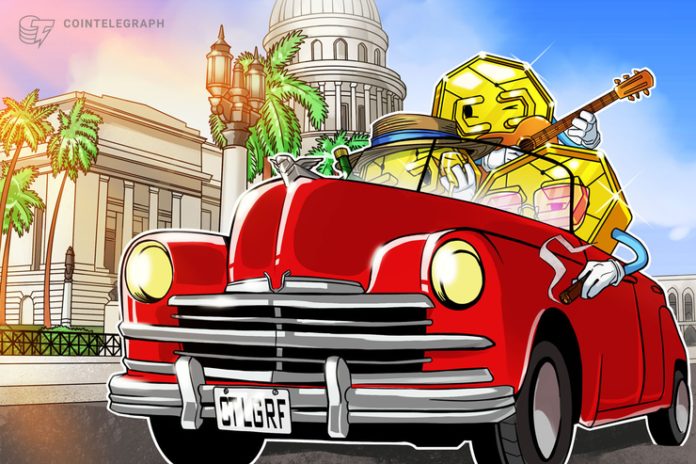 Following the roll-out of mobile internet across the country in 2018, many ordinary Cubans are increasingly using cryptocurrencies to bypass economic sanctions imposed by the United States and access the global marketplace.

Despite growing adoption, cryptocurrencies still face a number of challenges in Cuba, including limited access to crypto exchanges, lack of a pertinent regulatory apparatus and the growing popularity of a gold-backed MLM stablecoin.

On Sept. 12, a report published by Reuters included excerpts from an interview with Jason Sanchez, a 35-year-old Cuban who describes virtual currencies as “opening new doors” for ordinary citizens. The Havana resident runs a cell phone repair shop and uses Bitcoin (BTC) to purchase hardware online from China.

According to members of CubaCripto, a Telegram group boasting 600 members and considered to be among the first crypto-oriented online communities in Cuba, cryptocurrencies are increasing in popularity for several utilities.

While the primary utility of cryptocurrencies cited is their capacity to allow Cubans to circumvent economic sanctions and make purchases online, other members of the local crypto community are looking to virtual currencies for trading and investment purposes, seeking to profit from Bitcoin price volatility.

Despite Bitcoin’s price fluctuations, some Cubans are also using crypto as a means to store value. Many of CubaCripto’s members also emphasize the privacy benefits to Bitcoin, highlighting that their financial activities are less easily traced by the local government.

Alex Sobrino, the founder of CubaCripto, estimates that 10,000 Cubans regularly use cryptocurrency. According to Alex, ordinary Cubans are using crypto to purchase phone credit, buy goods online, and even make hotel reservations.

While cryptocurrency is increasing in popularity across cryptocurrency in Cuba, the island’s residents are barred from accessing many virtual currency exchanges. As of July 1, 2019, Binance DEX’s website began to geoblock users with IP addresses originating from 29 countries, including Cuba.

During May 2018, Bittrex also updated its terms of service to formally block residents of Cuba alongside four other nations subject to U.S. sanctions. In July 2017, a programmer based in the United Kingdom visited Cuba and, upon arriving home, found that his Coinbase account had been blocked after having accessed the account while on the island.

In November 2018, a report published by Mosaic.io found that 19 of 44 cryptocurrency exchanges restricted Cubans from accessing their platform, making Cuba the sixth-most blocked jurisdiction by crypto exchanges, followed by the United States, which is blocked by 30 exchanges, Iran and North Korea with 24, Syria with 23 and Sudan with 20.

CubaCripto members report that there are no traditional exchanges facilitating virtual currency for Cuban fiat currency. As such, many Cubans seeking to purchase crypto must do so via direct face-to-face transactions with local traders in exchange for cash or phone credit.

Fusyona, a company founded in 2018 seeking to bill itself as Cuba’s first cryptocurrency exchange, does not offer typical order-matching services. Instead, the company acts as a broker between cryptocurrency buyers and individuals located outside of the country who are seeking to remit funds to Cuba, charging a fee of up to 10 percent.

The founder of Fusyona, Adrian Leon, states that for citizens living in developed countries, virtual currencies are “just another option,” while for Cubans, cryptocurrencies comprise a needed solution to Cuba’s “exclusion from the global financial community.”

At the start of the year, Havana was struck by a devastating tornado that resulted in 3 deaths, 172 injuries and wholesale damage to local properties and infrastructure. Due to the financial embargo maintained against Cuba, GoFundMe and Facebook campaigns seeking to distribute aid to the island’s citizens were shut down.

In response, Fusyona launched a platform through which donations in the form of Bitcoin could be accepted and used to fund the provision of basic goods, including toiletries, water, canned food and powdered milk. The company also donated its profits to the platform during the campaign. Leon estimates that the platform currently has a user base of 1,300 — nearly double its previous count of 700 in July.

Cryptocurrencies are not regulated in Cuba

Despite the growing popularity of crypto in Cuba, no regulatory apparatus exists to legitimize the operations of businesses operating with cryptocurrencies on the island. Fusyona’s founder expressed concerns that his partners who receive and transfer cash might be suspected of engaging in illicit financial activities and has engaged Cuban Central Bank officials for regulatory approval. Due to the lack of regulatory architecture for crypto in Cuba, Fusyona is currently registered in Brazil.

Professor Alexi Masso Muoz of Havana University’s cryptography institute told Reuters that while no Cuban virtual currency laws currently exist, “it is possible” that the island may soon seek to develop crypto regulations. However, many Cubans fear the government may move to prohibit virtual currencies. On this, CubaCripto’s Alex Sobrino stated:

“We worry the government will restrict us, prohibit things, start to say this is illicit enrichment.”

Crypto gains momentum in Cuba during 2015

While last year’s roll-out of mobile internet was a catalyst for the recent growth in Cuban crypto adoption, virtual currencies have been slowly taking root in Cuba for at least four years following the introduction of public Wi-Fi networks in 2015.

During March 2015, CoinTelegraph interviewed members of Club Anarcocapitalista de Cuba (Cuban Anarchocapitalist Club, or CAC). The group is believed to have been the first entity to accept BTC payments in Cuba, starting from February 2015. The group’s co-founder, Jois Garcia, stated:

“We believe that Bitcoin has an essential role to play within the context of renewed relations between Cuba and the USA. This currency would not be punished like the dollar is today; the dictatorship makes holding dollars a burden, but the introduction of Bitcoin would allow us to potentially dodge this problem.”

Garcia was introduced to Bitcoin by Fernando Villar, a first-generation Cuban American based in New Jersey and the administrator of BitcoinCuba. At the time, Villar described the softening relations between Cuba and the U.S. as providing the catalyst for Bitcoin to “begin to flourish in Cuba,” highlighting that the presence of U.S. telecommunication infrastructure was improving “phone and internet services on the island.”

Despite his optimism regarding Bitcoin’s potential in Cuba, Villar acknowledged that the island’s cryptocurrency scene was in its nascent stages, stating that he was aware of only a single Cuban Bitcoin miner.

Despite the launch of public Wi-Fi, internet access was extremely expensive, with an hour of heavily-censored internet costing $4.50 — nearly 20% of the average Cuban wage at the time. While 37% of Cubans were estimated to have access to the internet in 2015, Freedomhouse found that less than 5% of the island’s residents had access to uncensored internet.

CAC co-founder Nelson Chartrand described the low rates of internet access as the principal barrier to Bitcoin adoption in Cuba during an interview with Vice in June 2015: “A lot of people in Cuba have never actually been online—that’s the big obstacle right now.”

When visiting Cuba during July 2015, Villar was involved in the first publicly executed Bitcoin transfers between Cuba and the United States. In an interview two months later, Villar spoke to the increasing penetration of communication technology in Cuba, stating that more Cubans owned “iPhones and Androids sent from families abroad than have bank accounts.”

Recent reports estimate that 1,400 WiFi hotspots are operational in Cuba, while 80,000 homes have internet access and 2.5 million Cubans have access to 3G mobile internet, the latter equating to nearly 22% of the population.

In addition to leading cryptocurrencies like BTC and Ethereum (ETH), the gold-pegged cryptocurrency and multi-level marketing scheme KaratGold Coin (KBC) is circulating Cuba.

According to a report published by PortalCuba.cu, the members of CubaCripto frequently discuss the price of gold and KBC, with users arguing over whether KBC is a “pyramid scam, multilevel company,” or a source of “residual income for life.” The report describes KBC alongside BTC, ETH and Litecoin (LTC) as among the most popular cryptocurrencies in Cuba.

At the start of July 2019, Cuba’s government announced via state TV that it was exploring cryptocurrency among other economic measures as a means to boost production and bolster growth. President Miguel Diaz-Canel announced that the new economic measures would raise incomes for a quarter of Cuba’s citizens in addition to facilitating access to foreign investments and the circumvention of U.S. sanctions. Cuba’s economy minister, Alejandro Gil Fernandez, stated:

“We are studying the potential use of cryptocurrency […] in our national and international commercial transactions, and we are working on that together with academics.”

Related: McAfee on BTC, Exile & the US: ‘No Way the Current System Can Survive’

Upon hearing of Cuba’s interest in blockchain technology, founder of McAfee and U.S. tax fugitive John McAfee, offered free assistance to the country in developing a virtual currency. In one interview, McAfee stated that creating a coin that is tailored to the economic needs of the country is not an easy task and that he is one of the very few people who can make it happen. Speaking to Cointelegraph while residing in Cuba, McAfee stated:

“Keep in mind Cuba is a very unique country. It’s the only communist country in the Caribbean area — the closest communist country to America. Cryptocurrency has had very little impact on the economy here, on the people. And very few people understand it or know anything about it.”

According to state-backed website Cubadebate.cu, the Central Bank of Cuba is currently examining the risks and benefits associated with virtual currencies.