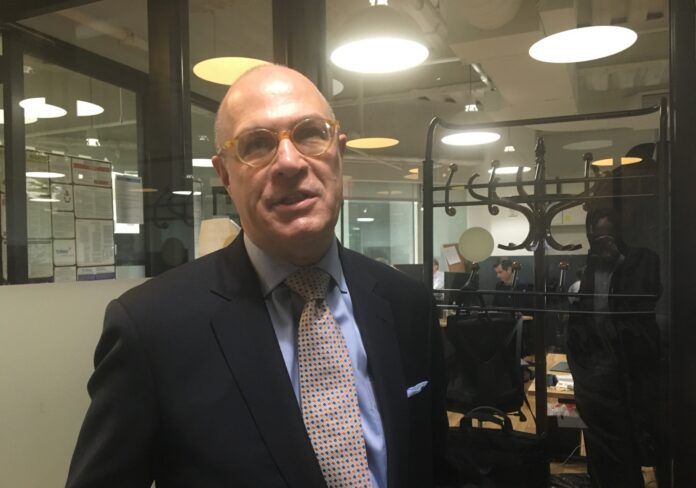 XRP is more like an alternative currency than a security, argues the former chair of the U.S. Commodities Futures Trading Commission (CFTC).

In an op-ed for the International Financial Law Review, Chris Giancarlo, who was chairman of the CFTC until last year, argued Ripple Labs hadn’t violated any U.S. securities regulations and that the third-largest crypto by market cap should have the same legal status as bitcoin or ether.

“XRP should not be regulated as a security but instead considered a currency or a medium of exchange,” he wrote with Conrad Bahlke of international law firm Willkie Farr & Gallagher. They said XRP doesn’t hit any of the “prongs” of the Howey Test – a landmark case that defines what is considered a security in the U.S.

According to Giancarlo and Bahlke, XRP was never marketed as a security, nor were investors promised any returns; the token has a very specific use case for liquidity and settlements; Ripple has never offered holders any rights of ownership or share of the profits. There is, he argues, no investment contract or formal relationship that exists between Ripple Labs and XRP token holders.

But the linchpin in his argument appears to be that there’s a divergence between how Ripple has defined XRP and what token holders themselves actually use it for.

“Ripple has repeatedly emphasized the functionality of XRP as a liquidity tool and a settlement mechanism,” Bahlke write, but there are plenty of investors who use XRP as a means of payment or just buy it hoping its value will increase.

There is no “commonality” that exists between investors, they continue. People who hold XRP hold it for multifarious reasons, unlike a security where the reasons for holding it are much more clear-cut.

As such, the fortunes of XRP investors aren’t tied to XRP in quite the same way as they would be with a security token. Some could benefit directly from XRP’s dollar-value staying low, others would want it to always remain high.

“[G]iven the juxtaposition between XRP’s intended use as a liquidity tool, its more general use to transfer value and its potential as a speculative asset, XRP holders who utilize the coins for different purposes have divergent interests with respect to XRP,” according to the authors.

That makes it very similar to other cryptocurrencies such as bitcoin and ether, both of which have been classified as definitely not securities by the Securities and Exchange Commission (SEC). Bitcoin is supposed to be used as electronic cash, but many use it as a store of value; ether was intended as “gas” to power a distributed network, but there are scores of investors who also use it as an alternative form of money.

“The fact that certain parties may acquire XRP with the hope that it may appreciate in value cannot be dispositive as the same is equally true of a large number of bitcoin and ether speculators,” Giancarlo said.

Just like bitcoin and ether, XRP should be classified as a token that comes with utilities, which are both defined in its white paper and have also emerged over time. “The increased adoption of XRP as a medium of exchange and a form of payment in recent years, both by consumers and in the business-to-business setting, further underscores the utility of XRP as a bona fide fiat substitute.”

The article has raised a few eyebrows For one thing, Giancarlo didn’t head the regulatory authority that determined what did and didn’t count as a security. Others were also quick to point out the law firm where he now works has Ripple as a client.

Jake Chervinsky, general counsel at decentralized lender Compound, said the article was pretty much irrelevant. “There are only two opinions about XRP’s security status that matter: those of the courts & the SEC. Everything else at this point is noise,” he tweeted.

There are also one or two relatively unsatisfying arguments. Chief among them is how Giancarlo explains away the fact Ripple still controls the vast majority of the XRP supply: the 6 billion tokens it controls directly and the 49 billion held in an escrow account.

“Even though Ripple holds a large stake of XRP in escrow and funds its operations through the sale of XRP (as well as the sale and licensing of software), this is no different than bitcoin or ether miners selling mined tokens or the Ethereum Foundation using its ether holdings to develop and support the Ethereum architecture.”

On the other hand, there is no miner or other single entity in the Bitcoin or Ethereum ecosystems that controls as much of the total supply as Ripple Labs. There also isn’t just one entity responsible for issuing new bitcoin or ether into circulation, as there is with Ripple, which sticks to its tight schedule of putting one billion tokens up for sale every month.

Conflating Ripple’s sale of XRP with that of mining, therefore, feels a bit strong.

As for Ripple not promising XRP investors any return on investment, there’s a court case rumbling on at the moment that accuses Ripple of doing just that.

The plaintiff in that case says remarks made by Ripple CEO Brad Garlinghouse, where he said he was “very, very long” on XRP, proves Ripple had promoted the tokens as an investment opportunity – more like an unregistered security than a “bona fire fiat substitute.”