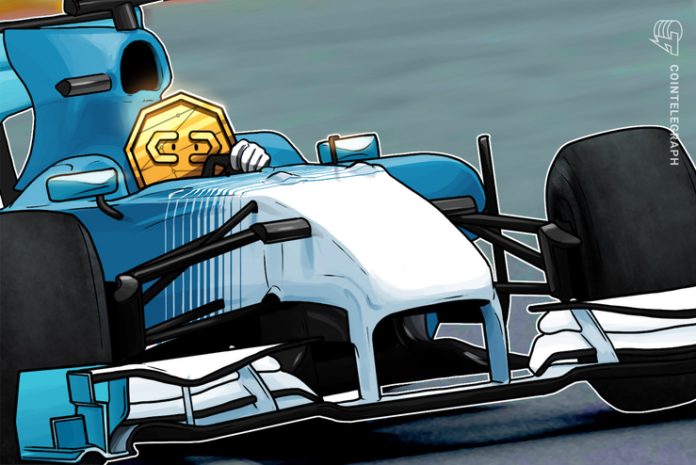 According to an announcement on Nov. 22, the auction will be held on Nov. 28, with fans already able to participate in a live contest to compete for various related prizes.

NFTs to be functional within F1 blockchain game

Unlike most cryptocurrencies, non-fungible tokens are a form of a digital collectible: non-fungible meaning they are not interchangeable, carrying unique information and varying in their level of rarity.

F1 Delta notes that it has set 5 different rarity levels for the 10 official racing cars set for auction. Each NFT will be usable in the forthcoming official F1 Delta game and will be auctioned simultaneously in a descending Dutch format, with a starting price of 30 Ether (ETH).

According to the announcement, all cars’ performance indices are similar and will be disclosed next week.

F1 Delta’s contest is currently inviting fans to predict the order of sale for the F1 team cars, with prizes including 30 Ether and various types of F1 Delta Time Car Gear NFTs.

As reported, Formula 1 signed a global licensing agreement with blockchain startup Animoca Brands in March of this year, paving the way for the development of the F1 Delta Time Game.

At the time, both parties underscored the significant brand power of Formula 1 and the new licensing agreement’s potential to broaden consumer exposure to blockchain.

Animoca Brands has also entered into a licensing agreement with Atari — famous for being the developer of iconic video games such as Tetris and Pac Man.

In Feb. 2018, Atari saw its share price skyrocket by over 60% after announcing that it would be investing in cryptocurrency.

Ethereum co-founder Vitalik Buterin has made the argument that non-financial blockchain applications can face more difficulty gaining traction and identified developments such as NFTs and gaming as potential areas that can broaden the technology’s appeal.