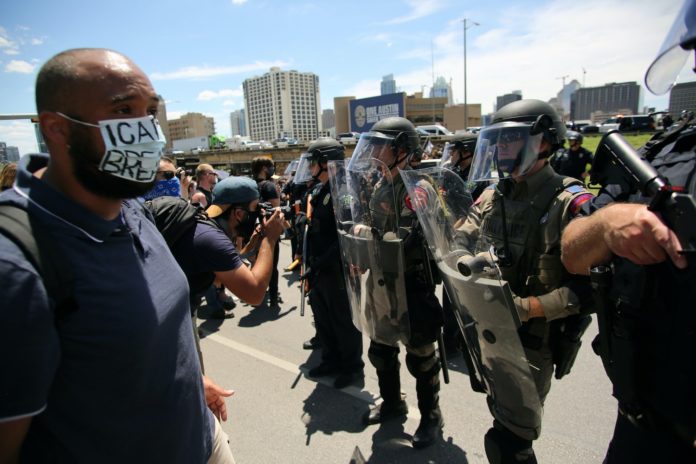 A blockchain-centric art project is pushing the boundaries of modern art with a controversial digital display.

The DADA Art Collective, a loosely affiliated group of roughly a dozen visual artists across the globe, teamed up with the non-fungible token (NFT) marketplaces OpenSea and Mintbase plus the file-storage blockchain Arweave to publish the names and faces of American police officers accused of killing unarmed black people.

The project, No Justice No Peace, was published June 6 in collaboration with crypto veteran Dennison Bertram, founder of the DappHero project.

“The collective got in touch with me,” Bertram said. “Social justice is something that I’ve always been interested in. They’d already minted and created these tokens. … It’s a fascinating demonstration of how to do social protests using blockchain technology.”

The DADA Collective’s Judy Mam said 10 artists contributed to this piece to support Black Lives Matter and police reform, with pictures of 30 officers along with their alleged crimes and case statuses.

The artists leveraged Arweave’s blockchain to create a wallet associated with each person killed, holding tokens that have data for the corresponding officers’ information.

“The private keys of the wallets that control these tokens have been destroyed. No one controls these tokens. These tokens can’t be censored, modified or taken down,” the project’s website says.

“Blockchain is itself a political statement, the ability to organize outside of government control,” Bertam said. “What about decentralizing justice or human rights or other aspects of society that are critical to the ways people live?”

And yet, this project raises tricky questions about the ethics of immutable digital records. In Europe, lawmakers have introduced a “right to be forgotten” with the General Data Protection Regulation (GDPR). Even in the United States, Mam said the artists behind this project prefer to stay anonymous because some jurisdictions limit access to evidence that might incriminate police officers.

“The police do take action against [outspoken] people,” Mam said. “These [visual pieces] are tokenized but they’re not for sale. … It was about making a statement.”

With simple text beneath black and white photos, the message is clear. There’s scant artistic flourish in this piece.

“We don’t forget. We find out who you are,” Mam said. “Maybe someday some of these men will get a [prison] sentence. … But at least now there’s a record that is there forever, immutably, of these people and their crimes.”

The criminal justice system failed to proceed with formal charges in most of these cases, despite community efforts, according to research from Bowling Green State University. This piece is just one of many activist projects already curating public lists with such information. Howard University student and crypto aficionado Gerald Nash, who was not affiliated with the “No Justice No Peace,” said he thinks the project is interesting.

“People should take into account this isn’t an organization doing unbiased research,” Nash said of the art collective. “As a black person and someone who wants to see justice. … I see no difference between this and holding up a sign.”

Of course, “censorship resistance” is a relative term. Governments could make it difficult to access affiliated websites and keyword searches, even if the blockchain data remains unaltered. Some experts would also argue a blockchain’s immutability depends on its incentive structure and participants, which likely are not infallible. The Arweave blockchain’s distribution is still nascent, with less than 3,000 members in the project’s Discord group.

Even with these limitations, University of New Hampshire law professor Tonya Evans agreed this art project is an interesting use case – memorializing information.

“I would compare it to what news reporters do … [but] reporters have to be very thoughtful about ways to correct the record, even if that’s to add to and not take away from,” Evans said, describing American freedom of speech laws. “Code is also speech. It will be interesting to see what type of innovation emerges during this period with regards to protecting free speech.”