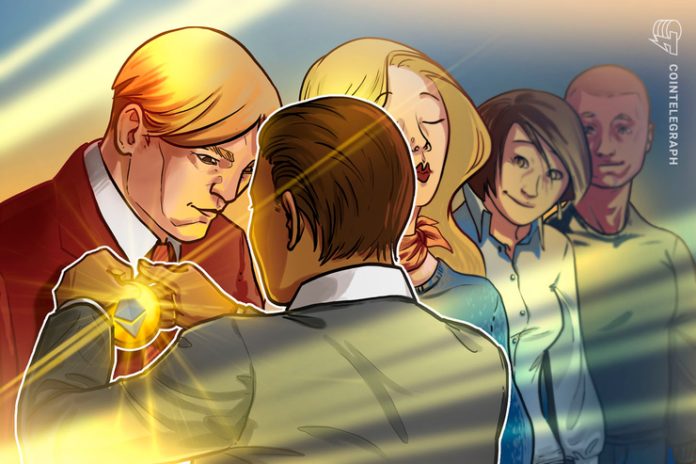 Enterprise Ethereum Alliance (EEA) created a token system to encourage the active contribution of member organizations and their employees to the consortium, as reported by Cointelegraph on Oct. 8. The tokens are powered by the EEA’s Off-chain Trusted Compute Specification and is said to be trustworthy enough for use both within and between different companies.

The system was first demonstrated at the Devcon5 conference at the start of October in Osaka as part of an experiment conducted inside the EEA. Specifically, member organizations are testing the viability of a project to check whether it can be used by any company outside the consortium for incentivizing its staff and optimizing its business processes.

Particular interest in the initiative was shown by financial companies — Banco Santander and Chainlink — that presented their use cases in one of the Devcon5 workshops. Given this, how can a reward token-based system be interesting from a financial point of view and why are banks willing to invest in the development and implementation of such solutions?

What do we know about the token?

To motivate employees and member companies, EEA proposed using three types of tokens at once — reward, reputation and penalty — which are said to be awarded from a grant fund each time an employee performs or does not perform a particular action. Simply put, while those who regularly contribute to the code are rewarded, the specialists who fail to complete work on time get a penalty token. The same principle is applied to the companies that are credited reward points for both group work and contributions made by its individual employees.

Paul DiMarzio, EEA’s director of community, explained to Cointelegraph that the proposed reward system differs from traditional loyalty programs and has no alternatives as of yet. He said:

“Reward tokens in the context of collaborative organizations differ from the typical and well-known reward systems used by airlines, retailers, etc. These systems incentivize loyalty. The use of tokens to incentivize collaboration is relatively new and very valuable in all sorts of member-driven organizations.”

The token itself represents a digital unit with a specific value. As stated in the EEA’s technical documentation, accumulated tokens are displayed as a balance in the employee’s profile and can be subsequently exchanged for items from the EEA swag store or a bounty defined in the grant.

In an entertaining and interactive manner, Marley Gray, the principal architect for Microsoft’s Azure Blockchain Engineering, demonstrated several possible ways how tokens can be redeemed. For example, 10 EEA tokens can be exchanged for an EEA t-shirt, while 100 tokens can be used to have dinner with Ron Resnick, EEA executive director. Gray added:

“We are creating the first simple use case that is actually usable so enterprises can actually start using tokens in their day-to-day operations because this model is easily transferable into one enterprise or between multiple enterprises.”

According to the EEA developers, the system will analyze not only the productivity indicators of individual employees but also tokenize the outcomes of the member organizations’ activity. As a result, each employee of the company will be motivated to regularly and efficiently work within the consortium. A contracted commitment to contribute to an organization’s activity will reflect the relative impact and the potential reward in the grant. At the same time, reward tokens can be transferred to other project participants, while penalty and reputation ones will stay nontransferable.

To sum up, a reward token-based system will work according to the principle that the more active the employee is, the more tokens they receive. But what if they are not active at all? In this case, the developers offer a so-called penalty system, with tokens being taken away from a member organization each time it commits to performing a particular task and doesn’t deliver. Notably, penalty tokens should be subtracted before an employee can redeem a reward token.

Why do banks need tokens?

World banks and financial institutions such as Banco Santander, JPMorgan Chase, ING, the Bank of New York Mellon (BNY Mellon), Qiwi, Chainlink and many others actively participate in the EEA consortium.

Their active participation in the EEA’s initiatives demonstrates a high level of interest in blockchain solutions that can enhance business processes. DiMarzio emphasized that with the new reward token system, companies would get an understanding of how to do this. He said:

“KPMG recent study says that organizations of all sizes, and across sectors, need to embrace blockchain-based tokenization — or risk being left out: noting that 82% of consumers willing to use reward tokens on the blockchain. Yet, enterprises and developers don’t know how to do it.”

At Devcon5, EEA member Banco Santander shared its latest case study of the blockchain system. The bank’s developer, Przemek Siemion, emphasized the importance of tokenized enterprise solutions and briefly demonstrated how blockchain could be used to protect bank clients’ data. As such, according to him, the company, together with other EEA members, is exploring the possibilities of the open ecosystem space around incentive models to see whether they can be leveraged in the enterprise.

Related: What Are Crypto Banks and How Do They Work?

John Whelan, chairman of the board of the EEA and head of Digital Investment Banking at Banco Santander, told Cointelegraph that tokenization will drive financial innovation:

“The concept of digital tokens has been given to us by the blockchain world and it appears that in the coming years many different asset classes will be tokenized. As such, the Token Taxonomy Initiative will be key to ensuring that this next wave of financial innovation will start with cross-platform standards in mind.”

Banks have a great interest in the study and development of blockchain-based enterprise solutions. There is also an economic justification for that. According to a report by consulting firm Accenture, the eight largest investment banks can save up to $12 billion a year by 2025 if blockchain-based products become widespread.

One of the EEA’s member organizations, JPMorgan, annually invests $11 billion on IT, with the major part of this budget being spent on routine operations automation. In June 2016, the company launched the Contract Intelligence (COIN) program that cuts the time spent on verifying documents from 360,000 hours a year to several seconds. Larry Feinsmith, managing director and head of global tech strategy at JPMorgan, said:

“While other tech companies have a narrower scope of things they do very well, what differentiates JPMorgan Chase is our ability to invest $11 billion dollars in a broad number of technologies simultaneously. Our size and scale are simply unparalleled.”

The EEA is not the first organization to offer a token to motivate staff members. In June 2018, the payment system Qiwi Blockchain Technologies (QBT) announced the launch of a reward program called QBT token.

It has been reported that one of them is designed to reward employees for the implementation of the project deliverables and can be exchanged for corporate bonuses. The other one — a voting token — grants authorized employees the right to decide how many tokens to charge for the contribution to the development of the company, and to whom. According to Qiwi representatives, about 50% of the net profit, to which tokens should be tied, was allocated for the implementation of the QBT program. The employees were supposed to receive the first coins in 2018.

Another financial giant, PayPal, launched, an internal blockchain platform for incentivizing its employees in mid-November, where they can exchange corporate tokens for various services and goods. Once obtaining a certain number of tokens, an employee can, for example, play poker with the vice president of the company or have a cup of coffee with the CEO. Although PayPal tokens have no value outside the company’s office, they can be traded among employees.

In one of the leading Spanish banks, Banco Bilbao Vizcaya Argentaria (BBVA), tokens are awarded to employees for developing their skills and training other specialists. According to the company, 4,000 employees have already taken part in testing the project and 20,833 new tokens have been created so far.

Explaining how the solution works, Ricardo Forcano, BBVA’s global head of talent and culture, said it “assigns value to training through tokens that certify each hour of training taken or given to other colleagues, and opens the doors to all employees — independent of their role — so that they can take courses that until now have only been available by invitation.”

The accumulated tokens can be further redeemed for participation in professional training courses and workshops. The most successful of the employees can gain access to private events and even meetings with top bank managers.

A tool to study blockchain

The daily use of corporate tokens helps the Bank of New York Mellon’s IT employees better understand the structure and operation of blockchain technology. Suresh Kumar, BNY Mellon’s chief information officer, emphasized that while the bank is not interested in cryptocurrency, it sees the potential in exploring the possibilities of the blockchain. He noted:

“It’s a way for own employees to understand what it is so they can think about the implications for their own work and for our clients.”

It’s one of the first initiatives developed by banks to help employees learn about the technology in an easy and interesting way. “It’s not like going to a classroom training or a seminar, but something that people can try themselves and play with it,” Kumar added. Along with educational purposes, staff members can also redeem BK Coins – the bank’s digital currency – for gift cards and vouchers.

Testing a solution before offering it to customers

The Japanese bank Mitsubishi UFJ Financial Group (MUFG) is actively experimenting with digital technologies to explore the possibility of using blockchain for financial purposes such as everyday financial transactions and payments. Most recently, the bank released a stablecoin for facilitating work with retail customers. However, before offering the coin, MUFG is testing it among its employees, who shop in a small store in the headquarters of MUFG.

In addition to stablecoin, whose scope of application can be expanded in the future, MUFG is testing a token for corporate use. The essence of the new digital asset is to serve as a unit in the system of rewards and bonuses for employees who work less overtime and lead a healthier lifestyle.

Examples of large banks around the world show that reward token systems are not only tested but also successfully applied by financial corporations. At the same time, the large-scale initiative of the EEA consortium may become an additional catalyst and a ready-made tokenized enterprise solution, which will allow companies to find wider applications to improve their economic performance. EEA’s executive director, Resnick, told Cointelegraph on the matter:

“Standardizing tokens to work anywhere could hold the key to one of the greatest economic opportunities in modern history. Just like standards that led to the rise of e-commerce on the internet, applying standards to tokenization will enable the enterprise to use tokens to serve as, or provide access to, a set of goods, financial assets, securities, services, value or content through enterprise blockchain applications.”