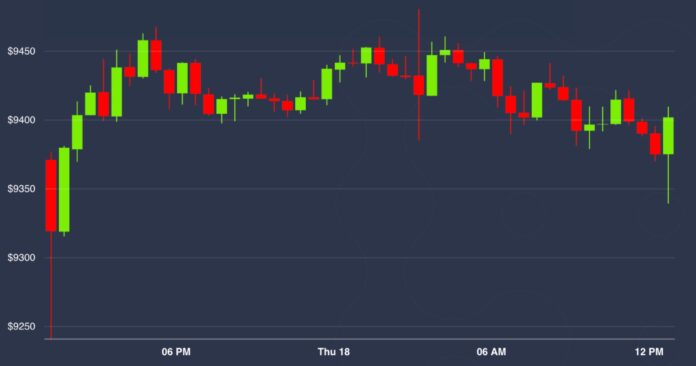 It’s a lethargic Thursday across most markets, including bitcoin. Yet, on a longer-term view, the big growth story remains the Ethereum network’s DeFi movement, which continues to help drive ether’s performance in 2020.

At 00:00 UTC on Thursday (8:00 p.m. Wednesday ET), bitcoin was changing hands around $9,443 on spot exchanges such as Coinbase. It then dipped to as low as $9,365. While the charts were relatively flat Thursday, the price was below its 10-day and 50-day moving averages – a bearish signal for market technicians who study charts.

Yet, not everyone sees the daily market action as bearish overall.

“I’m not bearish until sub-$8,500,” said Josh Rager, a cryptocurrency trader and founder of educational platform Blackroots. “I’m not ruling out a pump, but we need to reclaim $9,800!”

Traders like action, and this week has been bereft of it so far. However, it is not stopping some from scooping up $9,400 bitcoin, said Michael Gord, CEO and co-founder of brokerage Global Digital Assets. “There has always been a brief accumulation phase following each halving and each accumulation phase has gotten longer as the market has matured,” he told CoinDesk.

“The market has been very flat over the month of June,” said Denis Vinokourov, head of research for digital asset brokerage Bequant. “But there is room for a break out next week heading into options and futures expiry dates.”

Indeed, there are a number of bitcoin options expiring next week, on June 26, according to data aggregator Skew.

Traders point to the growth of decentralized finance (DeFi) applications being constructed on the Ethereum network as fundamental drivers of more people buying ether, causing the price to go up.

Read More: Compound Has Been a DeFi Darling. Its New Token Is Priced Accordingly

Over the past week, total value locked in DeFi has jumped 28%, closing in on $1.2 billion.

However, Michael Arrington, founder of Arrington XRP Capital, a fund that currently is using 80% of its assets for trading various cryptocurrencies, says narratives can change quickly in this market. “This year the story so far has been ether. But it might end up being bitcoin again,” he said.

Digital assets on CoinDesk’s big board are mixed Thursday.

In commodities, oil is the lone asset making gains Thursday, jumping 3%. A barrel of crude was priced at $38.84 as of press time.

In Asia, the Nikkei 225 of publicly traded companies in Japan closed in the red 0.45%, as stocks in the industrial and real estate sectors dragged the index lower.

In Europe, the FTSE 100 index in Europe slipped 0.73% despite fresh stimulus from the Bank of England to the tune of £100 billion.

U.S. Treasury bonds all slipped Thursday. Yields, which move in the opposite direction as price, were down most on the 10-year, in the red 5.6%.