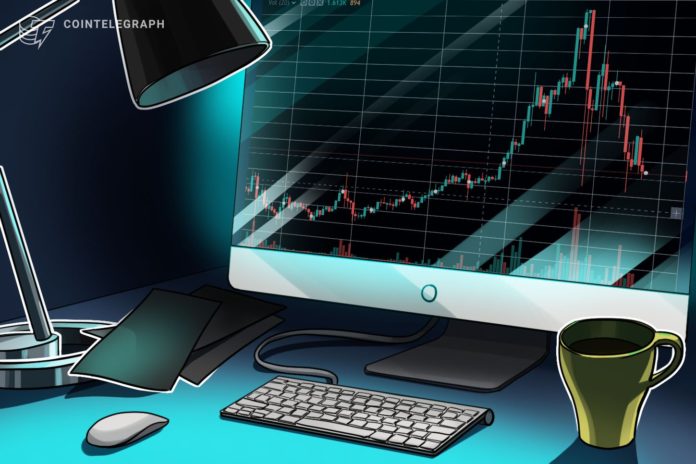 Bitcoin typically sees a heightened level of volatility when it approaches key dates. Crucial periods in the cryptocurrency market include CME futures expirations and the closure of a weekly or monthly candle.

The 14% price plunge, which happened within merely five minutes, occurred without any futures or options expiration dates on the horizon. Cryptocurrency trader Hsaka emphasized the abrupt spike in volatility coincided with “no daily, weekly, monthly close. No exchange maintenance. No major options expiry. No CME futures expiry.”

The intensity of the drop of BTC at a pivotal area at $10,500 without any other catalysts such as news or key events indicates that Bitcoin simply broke down from a multiyear resistance level. In the near term, top traders remain divided. Some state that the price of Bitcoin could fall to the $6,000 to $7,000 range. The primary reason behind predictions of a continued downtrend is the fact that the recent price action destroyed the short-term market structure of BTC. Others believe that Bitcoin is likely to rebound at $9,400, which has historically been a strong support level, and retest $10,500 again.

The bearish scenario for Bitcoin

Technically, the fall in the price of Bitcoin from $10,000 to $8,600 was a perfect liquidity grab. BTC has ranged between $8,600 to $10,000 since May 14. In a single five-minute candle, BTC took both the high and low points of the range. Cryptocurrency trader Cred said:

“Still within daily range ($8600 support, $10000 resistance). Testing midrange + monthly S/R at $9300s. Failed breakout usually leads to opposite boundary, so I’ll look to sell the underside of $9300s if it fails. Boring, but watching developments at $9300s before acting.”

The bearish scenario for Bitcoin in the short term is quite simple: Reject $9,400 and fall below $9,000 down to lower support levels. The $9,400 level has served as an important area of rejection or recovery since early May for Bitcoin. A clear breakdown below it would indicate that the short-term trend of BTC has shifted.

Traders like Salsa Tequila noted that the price of Bitcoin will likely reject upper resistance levels such as $9,900 as it sees a relief rally following a brutal correction. If so, it would mark a rejection of the $10,500 resistance level for the third time since mid-2019. It raises the probability of the start of a new bearish trend.

The Bitcoin trader known as DonAlt said that BTC is now close to falling to lower support areas, including $7,700 and $6,400. Since both attempts at a breakout in October 2019 and in February were stopped at $10,500, the trader emphasized the possibility of a “triple top” formation being printed in the near term.

Speaking to Cointelegraph, technical analyst Eric Thies said that he favors a bullish scenario in the short term. But if the price of Bitcoin rejects $10,000 again and drops below $9,000, Thies said a drop to the $7,000s is a possibility in the third quarter of this year:

“If BTC can not reclaim $10k, the ceiling will eventually lower to $9.5k and push us to potentially lower $7ks over the summer.”

The recent correction also put the monthly candle of June at risk of evolving into a bearish one. 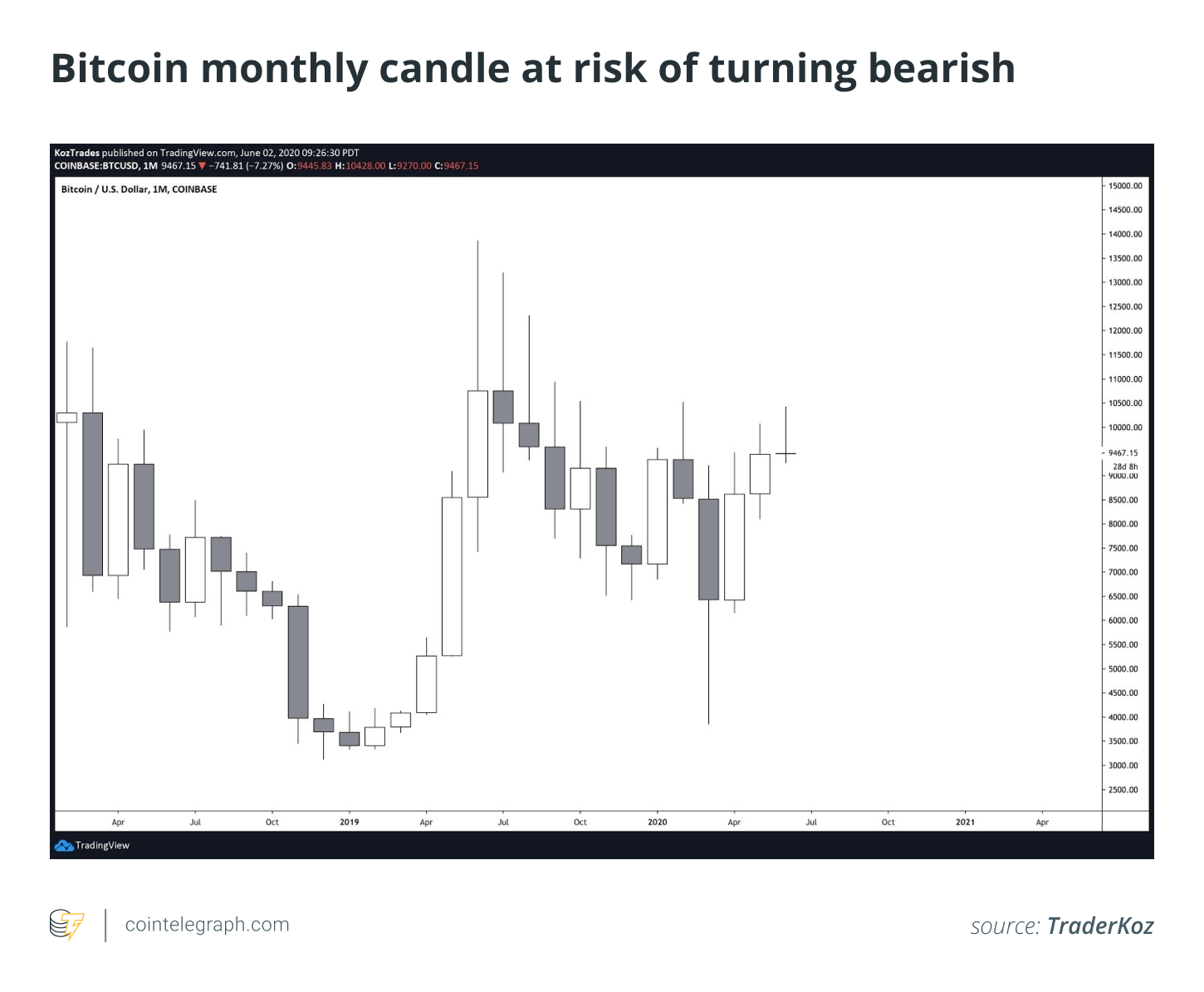 If the price of Bitcoin falls further to the low $8,000s, there is a possibility that a similar monthly candle as occurred in February, which led to a drop to $3,600 the following month, can be printed. That opens the possibility of BTC seeing a multimonth correction. 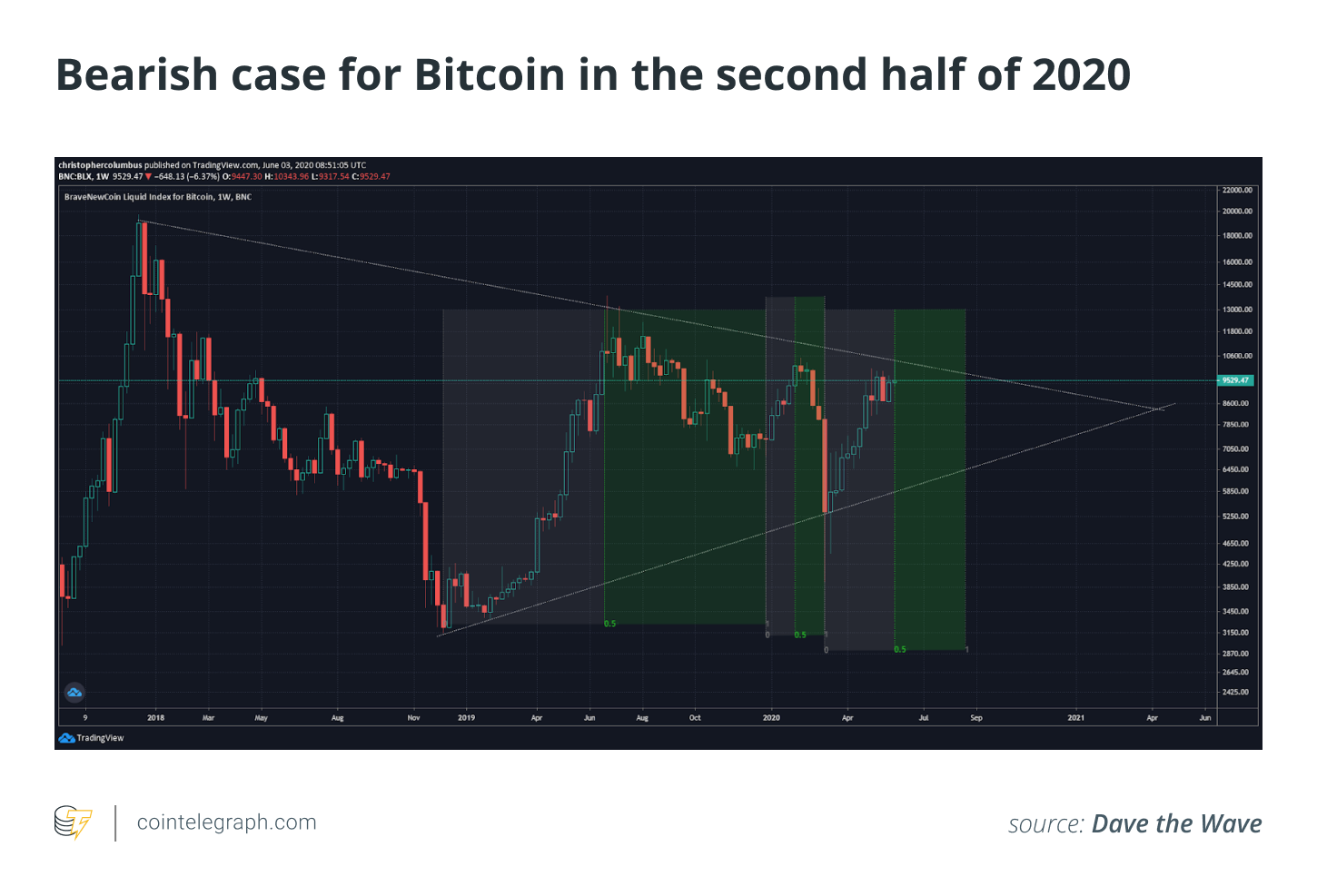 Historically, Bitcoin tends to see a strong performance in the second quarter of every year. In the third and fourth quarters, however, Bitcoin often pulls back and sees a three-month-long correction.

The bullish scenario for Bitcoin

The bullish scenario for Bitcoin in the short term is to establish $9,400 as a support level and remain above it to climb back over the $10,500 mark. Thies told Cointelegraph:

“If BTC should reclaim $10k in the short-term, without dipping below $8.6k, we will see $11k thereafter, and ideally retest $10k before continuing even higher. Given the technicals available to us at this time, I’m expecting [the bullish scenario], with the bulls regaining $10k shortly and then to gain momentum to continue onwards thereafter.”

Similarly, Bitcoin trader Satoshi Flipper laid out a bullish pattern for Bitcoin to retest $10,500. But it would require BTC to remain above $9,400 and show strength at a key support area. 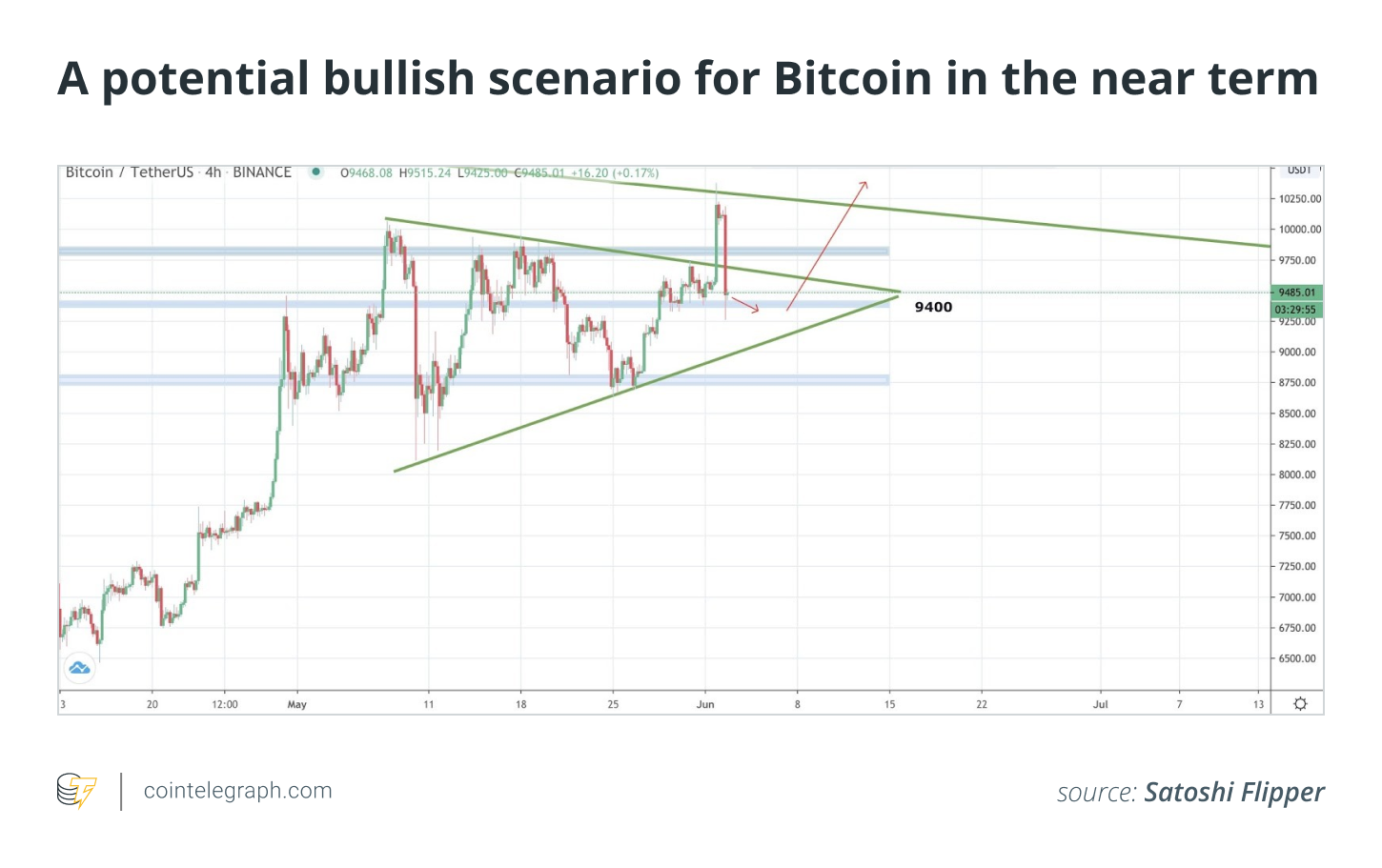 Matthew Ficke, the head of market development at OKCoin, told Cointelegraph that the perception of Bitcoin as a hedge against inflation and government influence is increasing, which may make Bitcoin more attractive:

“BTC’s move back above $10,000 coincides with civil and economic unrest throughout the US. Some argue the environment reminds the market that BTC can act as a hedge against excessive government influence. As equities are near pre shelter in place levels, many seem to view crypto as relatively attractive.”

Ideally, the volume of the Bitcoin spot market has to maintain its momentum for the uptrend to continue. So far, major spot exchanges such as Binance have seen a decline in Bitcoin-to-Tether (USDT) volume, which may hinder the possibility of a major breakout above $10,500. There is a possibility that the rapid pullback was a move to shake out weak hands, and that is what buyers are relying on. Bitazu Capital‘s founding partner Mohit Sorout said:

“Market liquidated over-leveraged participants on bitmex. $123M in shorts $96M in longs, all in a span of 24 hours. A healthy $btc sentiment reset. Range a couple days, trap late bears then run it back up.”

Variables that may affect the price

The entire move up from $8,800 to $10,440 was mostly futures driven, and the pullback to $8,600 on June 1 was also caused by a cascade of liquidations in the futures market, as economist Alex Kruger said:

“Many traders decided last night’s $BTC pump was a response to Trump’s speech. That was a leverage driven breakout. OI increased even as liquidations exploded while predicted funding and futures’ basis turned extreme. Then levered longs got nuked today. No need for narratives.”

As seen in the steep pullback, when the futures market is behind a major rally to a multiyear resistance level, the probability of a correction increases. Before the drop to $8,600, the open interest of BitMEX’s Bitcoin futures contracts was at $718 million. The funding rate was also at 0.16%, which indicates the overwhelming majority of the market was anticipating BTC to go up in value.

A study by Coin Metrics also found that the derivatives market is now much larger than spot markets. For BTC to see a proper bull market, a balanced distribution of volume across futures, options, spot and institutional markets is ideal. The report read:

The futures market accounting for the majority of Bitcoin trading activity is a variable that may leave BTC vulnerable to a continued downtrend in the coming months.

However, a big positive point for Bitcoin is its steadily growing institutional adoption. Since May 11, investment firm Grayscale has been purchasing 1.5 times more Bitcoin than is being mined, absorbing a significant amount of circulating supply of BTC.