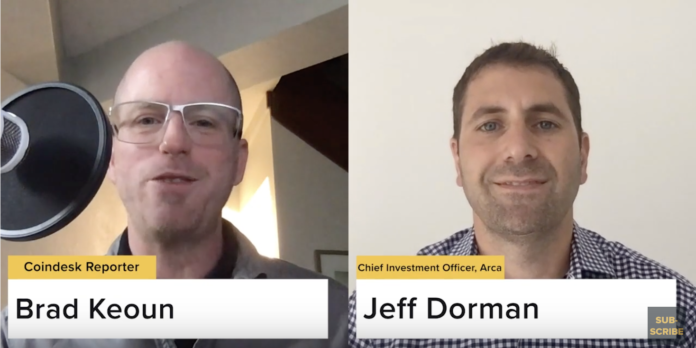 Arca Chief Investment Officer Jeff Dorman joined CoinDesk’s Brad Keoun on Thursday, Oct. 24, to talk about the current downward trend in crypto pricing and why things may be looking up. (On Friday, bitcoin’s price shot up 13 percent to more than $8,400.)

“It’s always difficult real-time to understand what’s causing a price decline or a price appreciation. After the fact, you can piece together pieces of news that may have caused it,” said Dorman, adding:

“I think over the last months, not just yesterday, you’re definitely seeing some miners selling, which is causing some downward pressure. But the reality is, I think these selloffs are more about lack of money in the system right now. There’s just not new money coming in at the moment.”

His take? There is no “buyer of last resort” in crypto, which means that “distressed” assets don’t get scooped up.

Dorman also commented on the Libra hearings, saying he’s not certain they had much effect.

You can watch the rest of the interview above or read the transcript below.

Brad Keoun: We’re here today with Jeff Dorman. He’s the chief investment officer of Arca. We’re very lucky to have him. He has a long resume of experience. He’s a former high-yield bond trader with big firms like Citadel, Merrill Lynch and Friedman, Billings, Ramsey, and lately he’s been bringing that experience to bear in the crypto space. Jeff, thank you so much for your time today.

Jeff Dorman: Absolutely. Thanks for having me.

BK: Yesterday we had a very big move down in bitcoin, and I’d love to get your thoughts there on what happened.

JD: Sure, it is always difficult to understand what’s causing a price decline or price appreciation. After the fact, you can piece together pieces of news that may have caused it. I think over the last months, not just yesterday, you’re definitely seeing some miners selling, which is causing some downward pressure. But the reality is, I think these selloffs are more about lack of money in the system right now. There’s just not new money coming in at the moment, and, more importantly, there’s no buyer of last resort. In traditional asset classes, you see rotation when equities go to cheap. The distressed bond guys start to buy if distressed bonds or companies by that their own bonds and equities. In crypto, right now, there really is just no buyer of last resort. You’re not seeing that rotation yet, so until that until that starts to happen, I think moves up and down are always going to be exacerbated.

BK: What’s it gonna take for that to happen?

JD: It’s a good question. I think a lot of it is still the education. I think people are definitely learning. Education is number one. We need to get reputable companies in here who help traditional investors get in here and part of it is simply getting traditional investors to recognize that this really is an asset class that they can you can use for a variety of different purposes, whether that’s for hedging with speculation, whether it’s for growth.

BK: Just sort of anecdotally looking at bitcoin market, and it seems like we’ll have these big stair-step moves and then we’ll go along in a range, and then we’ll have another very large move. I’m curious for people who are kind of kicking the tires on this market. What out of the how did they look at that?

JD: I think for the most part, traditional investors are not scared off by volatility as long as there’s upside volatility as well right now, but volatility can be managed. There are certainly times when you’ll get all sides. There are certainly times where you don’t see something coming and you’re not hedged or wedged appropriately. For the most part, traditional investors are very good at managing risk, and they’re very good at managing volatility so that that’s to me, not something that’s going to scare people away from this market. I think what will scare them away is not understanding where the volatility is coming from, and I think that’s where a lot of the due diligence is going through right now, trying to figure out how it’s happening, how they can prevent against it what kind of managers or that they can trust to actually manage that risk for them.

BK: What were your thoughts on Mark Zuckerberg’s testimony yesterday? And I’m curious if there’s any way that sort of maps back to how people think about bitcoin?

JD: I think retail investors probably aren’t spending a lot of time watching C-SPAN. Certainly traditional institutional investors have that out in the background. So I think it’ll certainly shape some narratives in terms of what people take out of it. But me personally, I felt uncomfortable watching it. I don’t like when six hours of time is being used and accomplishing very little. I don’t think the questions were very good, and as a result, the answers couldn’t be very good either. I think it’s a good thing that regulation is going to happen, and I think it is a good thing that for good or for bad, the Libra and Facebook project is forcing this into the public narrative faster than maybe it would have otherwise.

But in terms of price action, I think a lot of people were excited about Facebook and Libra, which probably contributed to the run-up earlier in the year. And now that that’s stalling and not going as well, it’s certainly contributing to the downside. But I don’t think in a vacuum that that one testimony or anything else that’s going on with Libra is really the main driver of crypto.

BK: Just looking ahead, a big event next week in traditional finance: The Federal Reserve is gonna have its meeting. And they’re expected to cut rates for the third time this year. I don’t know if you have any thoughts specifically on what that means for bitcoin in the short term? But maybe long term, any thoughts on on what the Fed is doing?

JD: Yeah, the Fed actions to date haven’t had much of an impact real time in the price of bitcoin already on any other digital assets except for the July 31 cut. The first cut really did spark a 25 percent rally over the next five days, August 1- August 6, just because it is such a reversal of what had been happening over the last four or five years of going the other way with tighter monetary policy rather than looser long term. So I don’t expect next week’s cuts to really have an impact. However, you couldn’t ask for a better long-term backdrop for bitcoin right now, with anything from what’s happening with the QE and all in the repo markets and just constant injections of liquidity, which obviously is going to lead to inflation at some point or just raising the debt ceiling. The political unrest that we’re seeing everywhere, from Chile, Argentina, to Lebanon to Hong Kong, low rates everywhere, which is just spurring aggressive investing and obviously creating further bubbles. So long term, I think this is absolutely part of the bitcoin bull thesis. But I wouldn’t expect too much of a reaction at all, just based on the rate cut itself.

BK: Just a last question here. I was just reading this editorial board piece from Bloomberg earlier this week, and they said that the world economy is quote “stumbling toward disaster.” And of course you know Michael Bloomberg potentially in the wings of, you know, as a presidential candidate, jumping in. But aside from that, Bloomberg has a lot of credibility and you’re a former high-yield bond trader, and one of the things they talked about was how bad it could get in a credit-cycle turn. And I’m just curious, What would that mean for bitcoin if if the U.S. really went into a full-blown downturn?

JD: In debt, we’re trained to look at downside, not upside, whereas equity guys usually look through rose-colored glasses and look at the upside first.

So certainly the people in the debt circles are more concerned about this right now than the equity guys. I think it’s a real concern. There are people who, nine years ago, eight years ago were calling for the same demise as people are calling for now and truthfully, nothing has really changed, except for this giant band-aid of liquidity that the Fed and other central banks have put over the problem.

So it certainly could get that bad. I don’t think the world going into a deep recession or a massive systemic banking failure is going to be good in the beginning for bitcoin. I think correlation goes to one across all risk assets as soon as things get bad. However, long term, it really would be the reminder of why bitcoin exists in the first place. And, you know, a lot of people, especially in the United States, when you’re not affected by the issues that are going on elsewhere, with real restrictive government regimes and real currency depreciation, you’re just not going to appreciate how important bitcoin really is to the future success of money.

But if we go through here in the U.S. because of a global recession, it will wake people up to how important this is that you do need to start thinking about safeguarding your assets again, right? The last time this happened in 2008 there wasn’t an alternative. Most of the smartest investors in the world were either shorting equities, and we know that was a disaster. Or they were buying gold, which has been a bad trade for 10 years, or they were shorting sovereign bonds. You know, anything from Italy to Spain to Greece. And that was a disaster because the ECB bailed everyone out. Bitcoin was just getting going. Then it wasn’t the viable option it is now. And if you do have a shake-up like that, like I said, near term it’s going to be bad for bitcoin. Long term, it will certainly make many more investors and many more people aware that bitcoin is a solution to these problems.

BK: Jeff, that is fascinating. And I really appreciate your time and your joining us today

JD: Absolutely. Fun to be here. It’s always good talking to you.