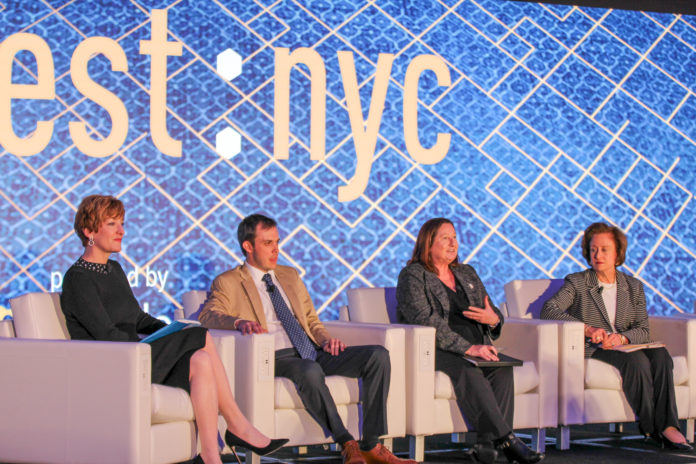 There’s a way cryptocurrency businesses can get around New York’s notoriously hard-to-get BitLicense, and it runs through Wyoming.

At least, so say members of the team that drafted the 13 crypto-friendly laws enacted by the Western state this year. One of those laws allows Wyoming to charter Special Purpose Depository Institutions (SPDIs), a new type of fully-reserved fiat bank that can also custody crypto assets.

With an SPDI, crypto exchanges and other startups could operate in New York without going through the state’s licensing rigmarole, under the same legal principles that exempt banks from needing state money transmitter licenses, Wyoming advocates said.

“We are fairly confident that the Wyoming SPDI will be able to operate in New York without a BitLicense,” Chris Land, general counsel of the Wyoming Division of Banking, said Tuesday at CoinDesk’s Invest: NYC event in New York.

The New York Department of Financial Services (NYDFS), which created the BitLicense in 2014, did not answer requests for comment by press time.

The BitLicense was one of the earliest regulations specially crafted for the blockchain industry. But many firms have complained that it is onerous and has driven entrepreneurs and innovators away from New York, the U.S. financial capital.

Only 18 BitLicenses have been granted in the rule’s five years of existence. Getting hold of one is known to be a slow and expensive process, and that’s if you are in full compliance with all the requirements, which amount to a heavy-duty version of a money transmitter license. Some companies that fell short of NYDFS’ expectations have publicly bemoaned the process.

In addition to addressing the BitLicense problem, an SPDI could ease a longstanding pain point for crypto businesses: the difficulty of obtaining banking services.

Once approved for the charter (the statutory minimum capital requirement to apply is $5 million), firms would have master accounts with the Federal Reserve and the own ability to clear their own wires.

In other words, they could literally be their own banks, to use a familiar motif from crypto-land.

“The significance is that crypto companies won’t need to rely anymore on the few traditional banks that have been willing to bank the industry,” she said.

The handful of crypto-friendly banks in the U.S. includes Silvergate in California and Signature and Metropolitan Commercial in New York. Long said one of the best-known of these banks (she wouldn’t say which one) employs 65 compliance officers, making the whole business very expensive.

If the Wyoming SPDI works out as suggested, it could be seen as an interesting parallel to the way Citi found a clever way to sidestep New York’s tough usury laws. The bank made a landmark decision in 1981 to move its credit card operation to South Dakota, where legislators were won over by Citicorp’s promise of jobs if that state lifted its usury ceiling.

And as part of the “far-reaching impact” of the SPDI, Long said she is optimistic the NYDFS will view the bank charter as trumping the BitLicense since banks have higher capital and regulatory requirements than money transmitters do.

Long also sounded optimistic about lawyering up if need be. After she spoke alongside Land on Tuesday’s panel, she said, “multiple New York attorneys came up to volunteer pro bono to help the Wyoming Banking Division litigate if it ever comes to that.”